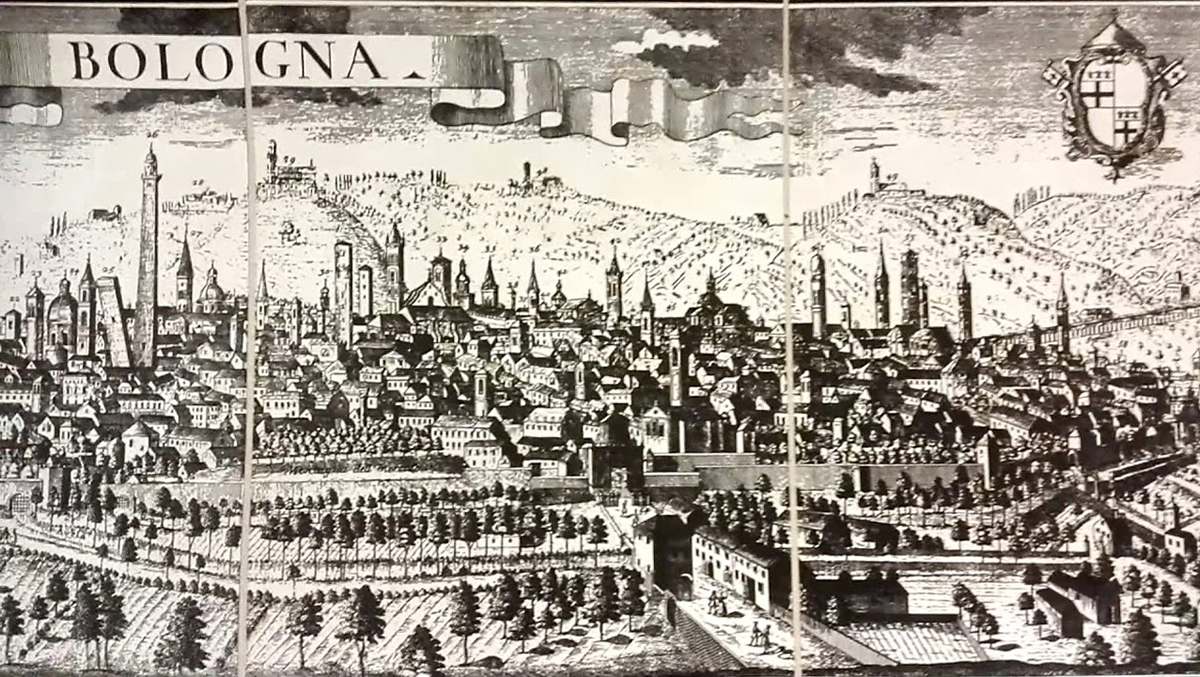 The towers of Bologna

Bologna has endured ages and centuries. There is no doubt, however, that its urban planning and its glory are strongly linked to the Middle Ages. The numerous towers scattered throughout the historic centre testify this greatness as documented by maps of the past and gave the city a skyline that anticipated that of modern New York by eight centuries. Today only 28 towers survive, of more than the 100 towers erected in the city: some may be visited, while others can be seen between the buildings and the red roofs of the centre.

The Asinelli and Garisenda Towers

The towers had both a military and aristocratic function: they gave great importance to the families who built them. Built in 1109 and considered the heart of the city, the Asinelli Tower owes its name to the homonymous family. Today, climbing the 498 steps of its internal staircase, one can enjoy a romantic breathtaking view of Bologna. On the other hand, the Garisenda Tower is much lower than it’s majestic neighbour, the sinking of its foundations commons it with the more famous Tower of Pisa. For this reason Dante mentioned it in the “XXXI Canto dell’Inferno”, comparing it to the giant Antaeus. 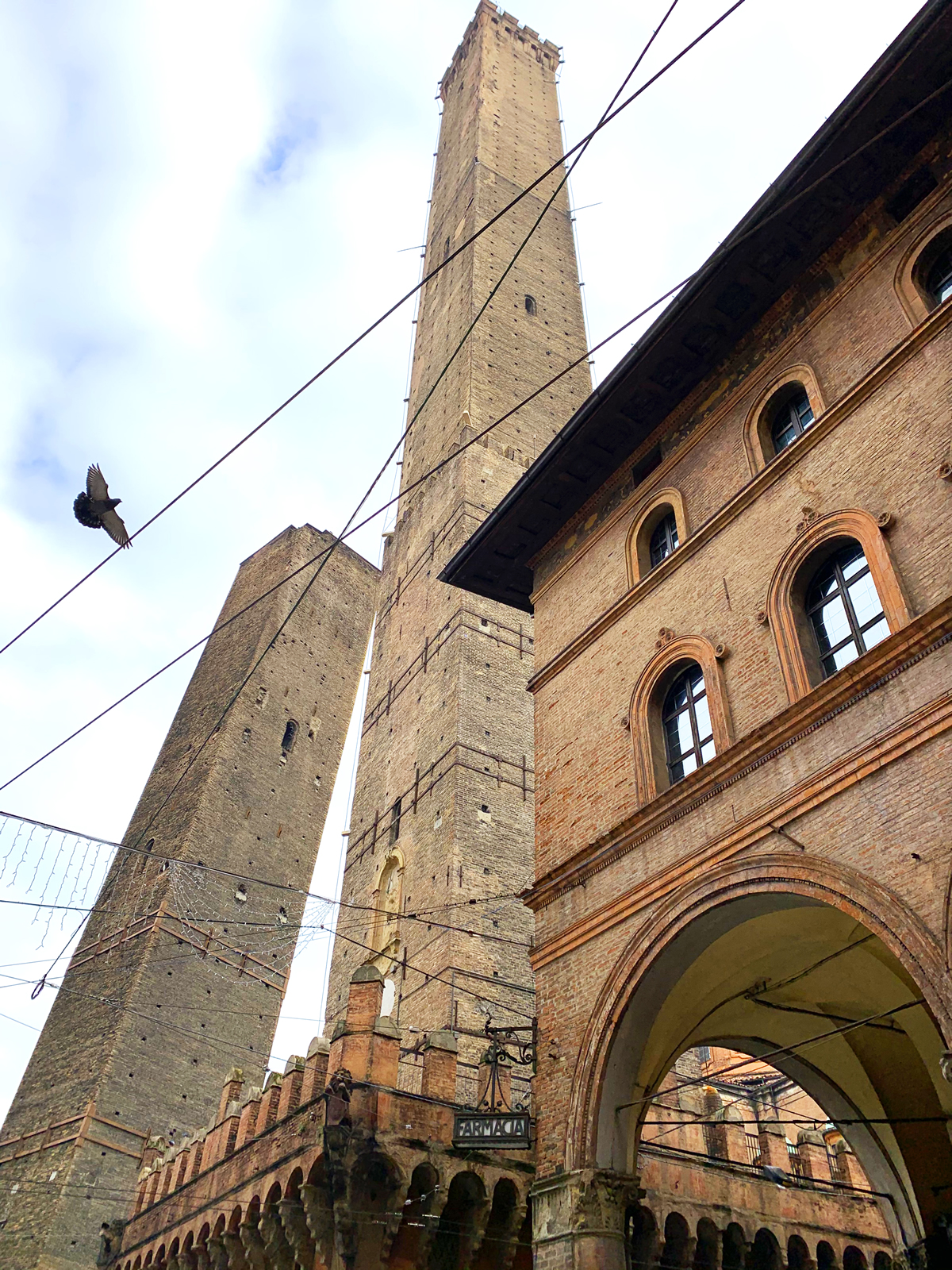 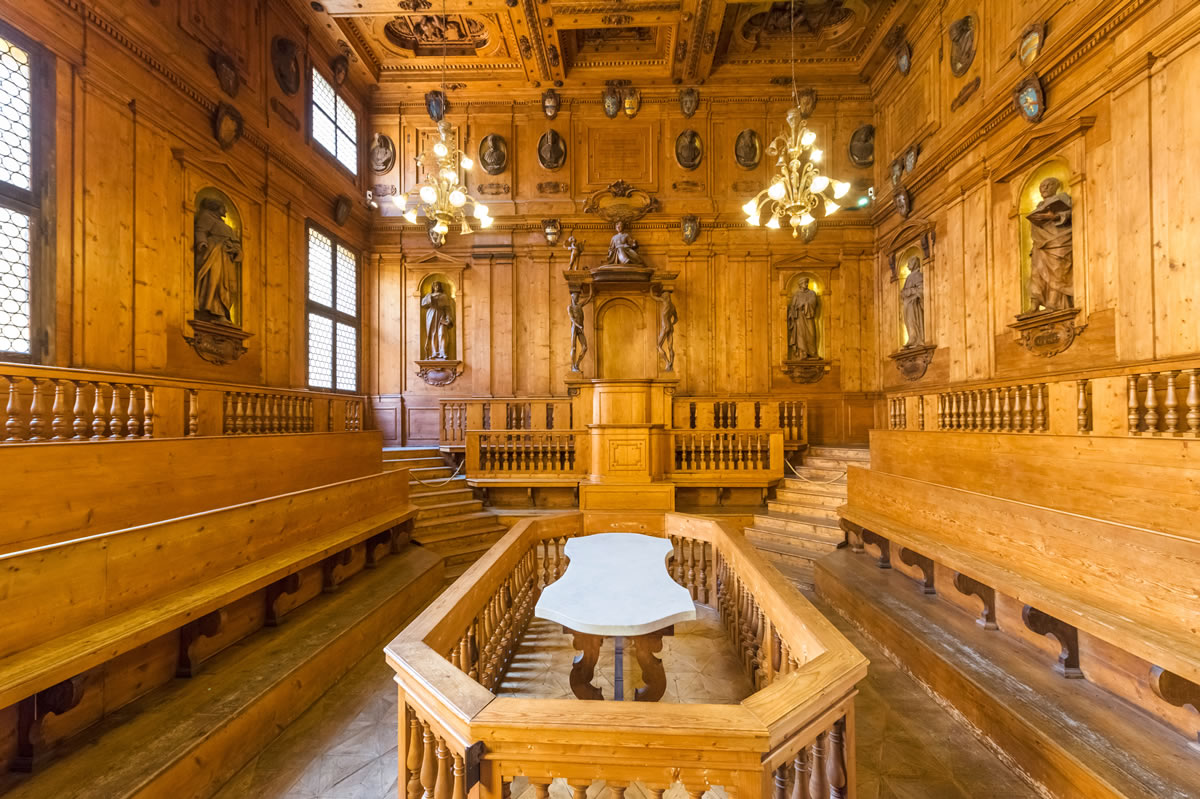 The Archiginnasio and the anatomical “theater”

Who would imagine that next to the splendid boutiques of the Cavour Gallery, in the heart of the city, there is an amphitheatre-shaped room? In the past it was a meeting place for intellectuals of the calibre of Giosuè Carducci and dedicated to the study of anatomy. The “Anatomical Theater” is just one of the jewels hidden in the frescoed rooms of the Archiginnasio. Original location of the oldest university in the Western world and later the Municipal Library, today the Archiginnasio testifies the profound link between beauty and knowledge.

The Trident of Neptune

Could a city with a glorious fluvial history not celebrate the God of the Sea? Neptune and its fountain are today one of the symbols of Bologna. Powerful and elegant in its size, the statue has enchanted inhabitants and travellers. Not only that but its majestic trident inspired the logo of the Bolognese car manufacturer Maserati. The first car model presented to the world with the famous emblem was the “Tipo 26” in 1926. 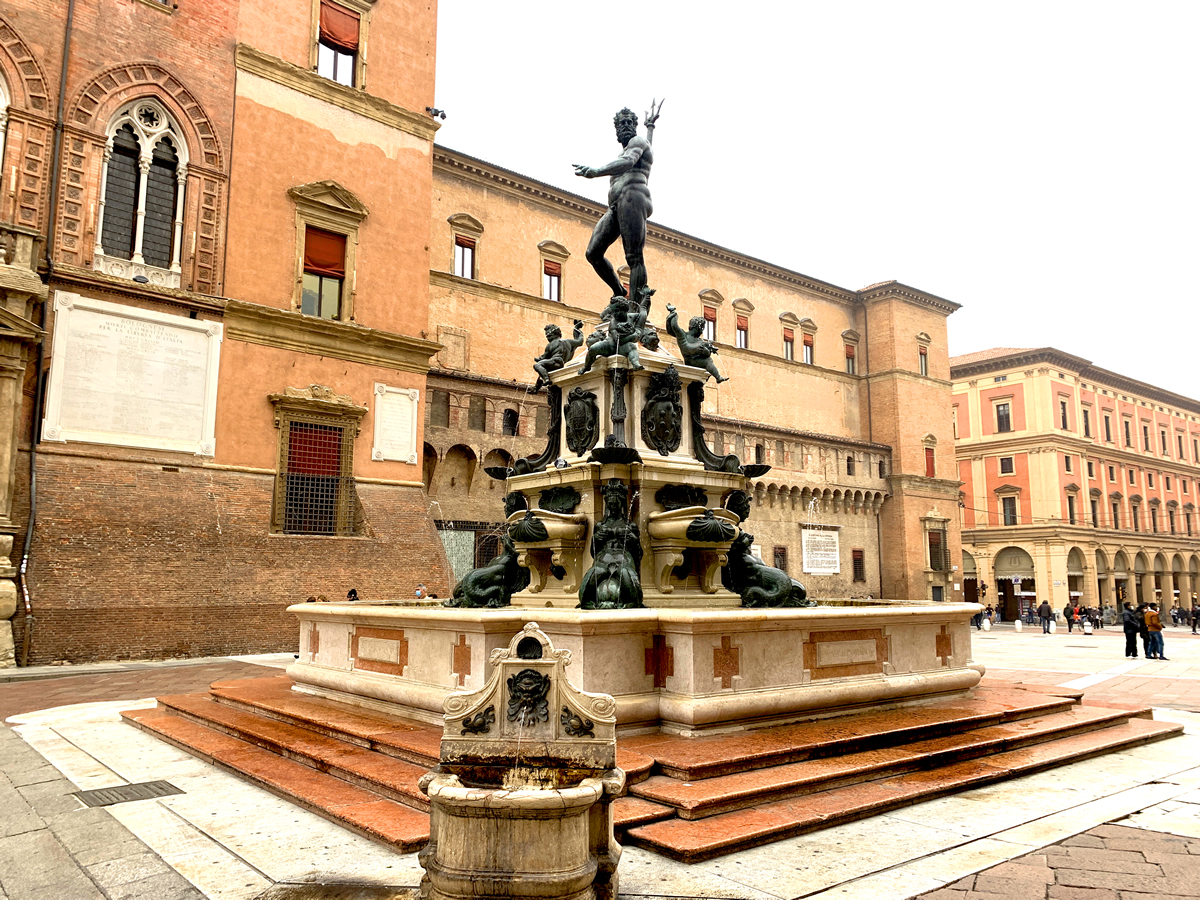 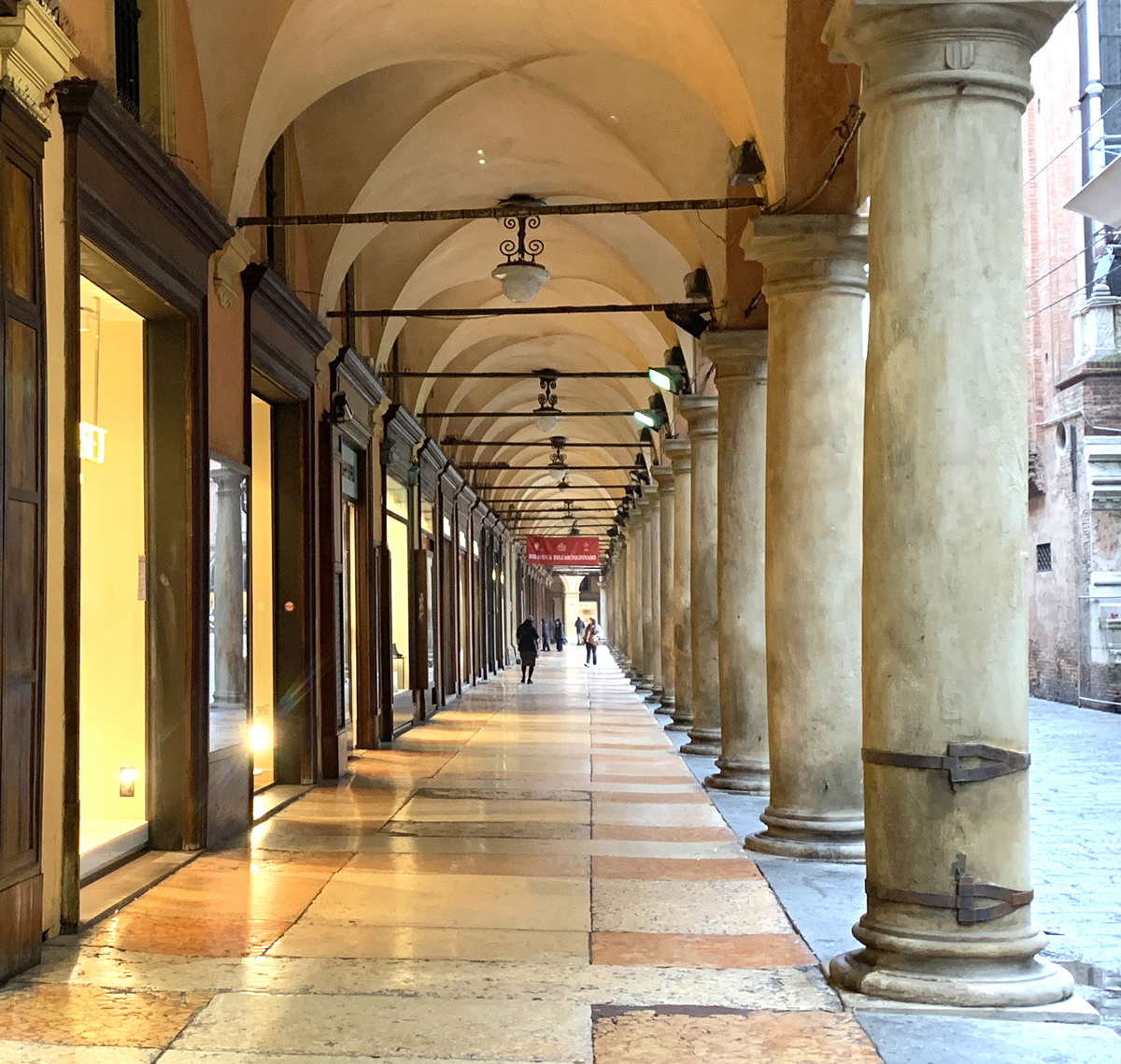 The arcades and the flooring of the Pavaglione portico

Portico of the Pavaglione – Galvani Piazza

Bologna, with its 53 kilometres of arcades is the most arcaded city in the world and its beauty is also reflected in its every detail. Who could imagine, in fact, that the flooring of one of the most popular arcades contains fossils and prehistoric shells? They are clearly visible and give the characteristic pink colouring to the flooring of the Portico del Pavaglione. More precisely, it is the ammonite red colour: a prehistoric rock from the area of Verona and brought to the heart of the city through the numerous waterways.

The Podestà’s vault and the acoustic game of voices

Admiring the famous unfinished facade of San Petronio in the shadow of the Podestà Portico, it is not uncommon to observe people intent on speaking to the four corners of the vault. The architecture of the pillars creates, in fact, a very particular acoustic game which allows you to talk to each other from opposite corners of the vault, facing the wall, without being heard by others. Legend has it that this effect, in medieval times, allowed lepers to confess without having contact with the priests. 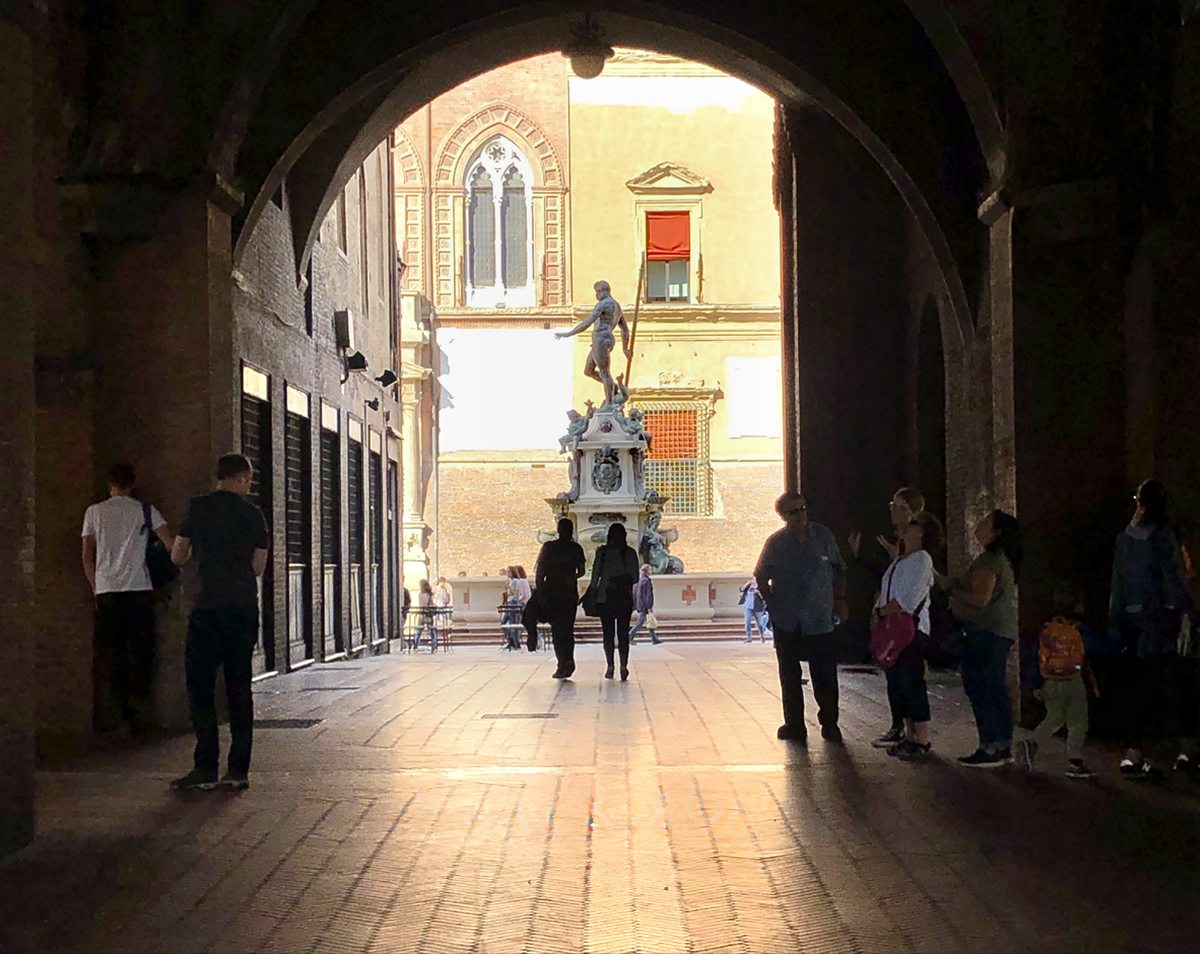 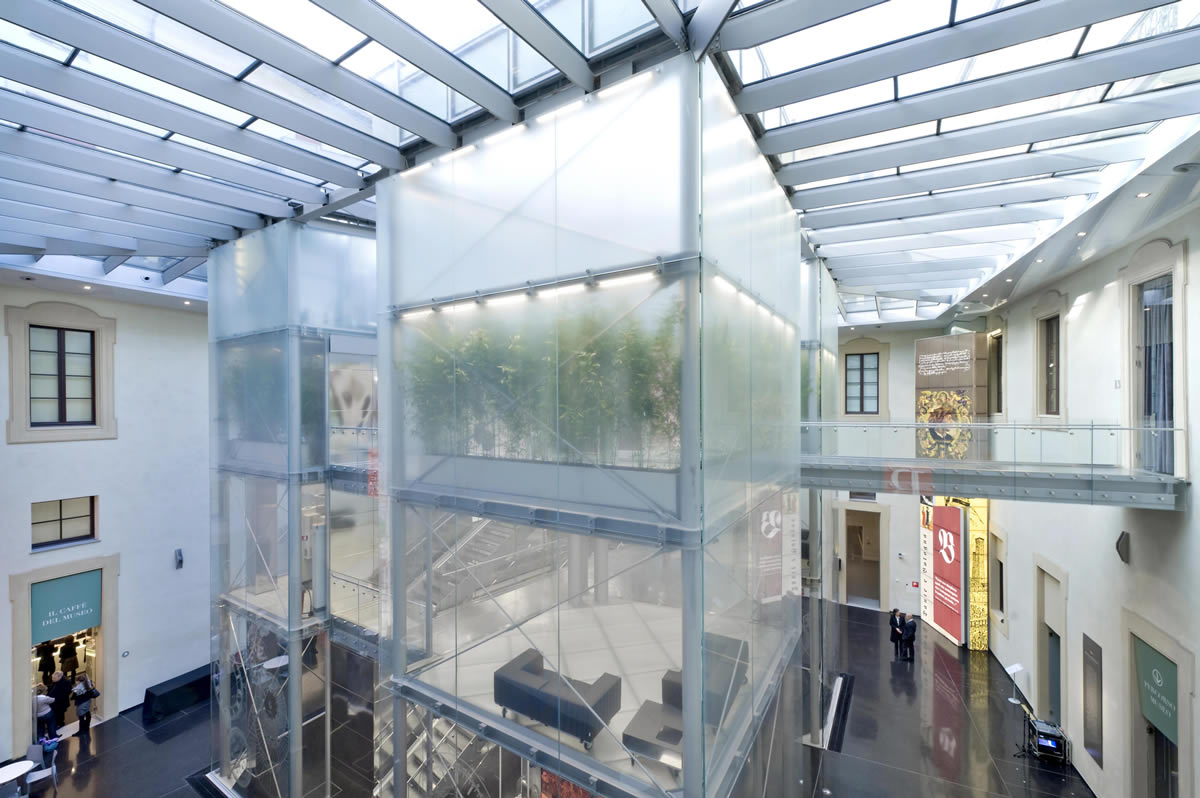 The Museum of the History of Bologna in Palazzo Pepoli

In the immediate vicinity of the Cavour Gallery there are historic buildings of rare beauty, among them, Palazzo Pepoli which houses the museum of the city. It is the link between the past and the future of the city: it illustrates the history, culture and transformation of the ancient Felsina in today’s Bologna. (Felsina is the transliteration of the Etruscan name which for some means fertile place, for others fortified). Tradition and multimedia itineraries guide young and old through an exciting journey through the history of the city. An example of this is the “Torre del Tempo” (Tower of Time) that the architect Bellini placed in the centre of the courtyard: a glass and steel installation which is flooded with natural light from above.

The Lamentation of Niccolò dell’Arca in Santa Maria della Vita

There is more than one reason why Gabriele d’Annunzio was stunned, almost struck by “a crash of passion” when observing the seven terracotta figures by Niccolò dell’Arca, when he entered the Church of Santa Maria della Vita one autumn evening to listen to sacred music. It is, in fact, a masterpiece of fifteenth-century sculpture unique for its strength and dramatic intensity for which it is difficult to find its equal in other art pieces. 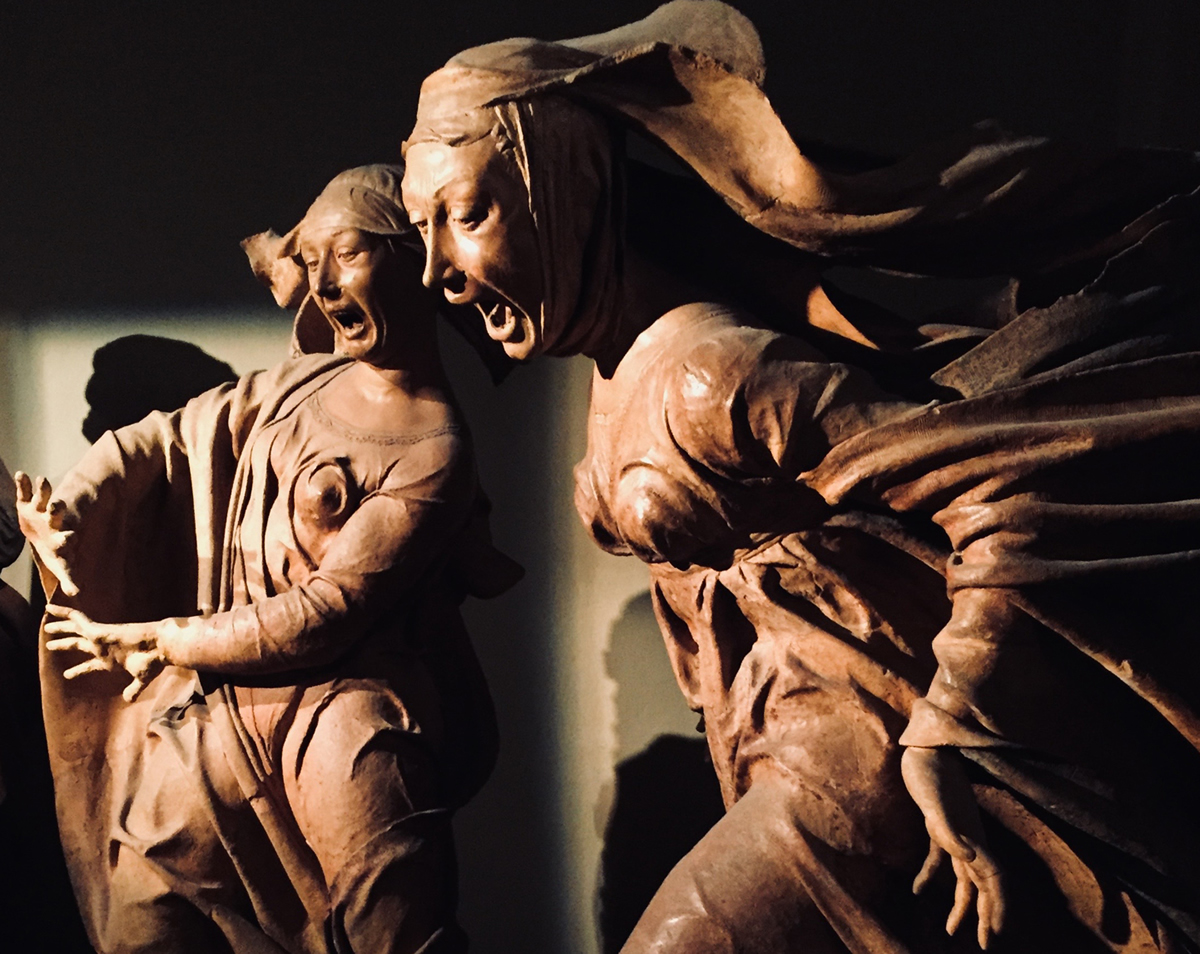 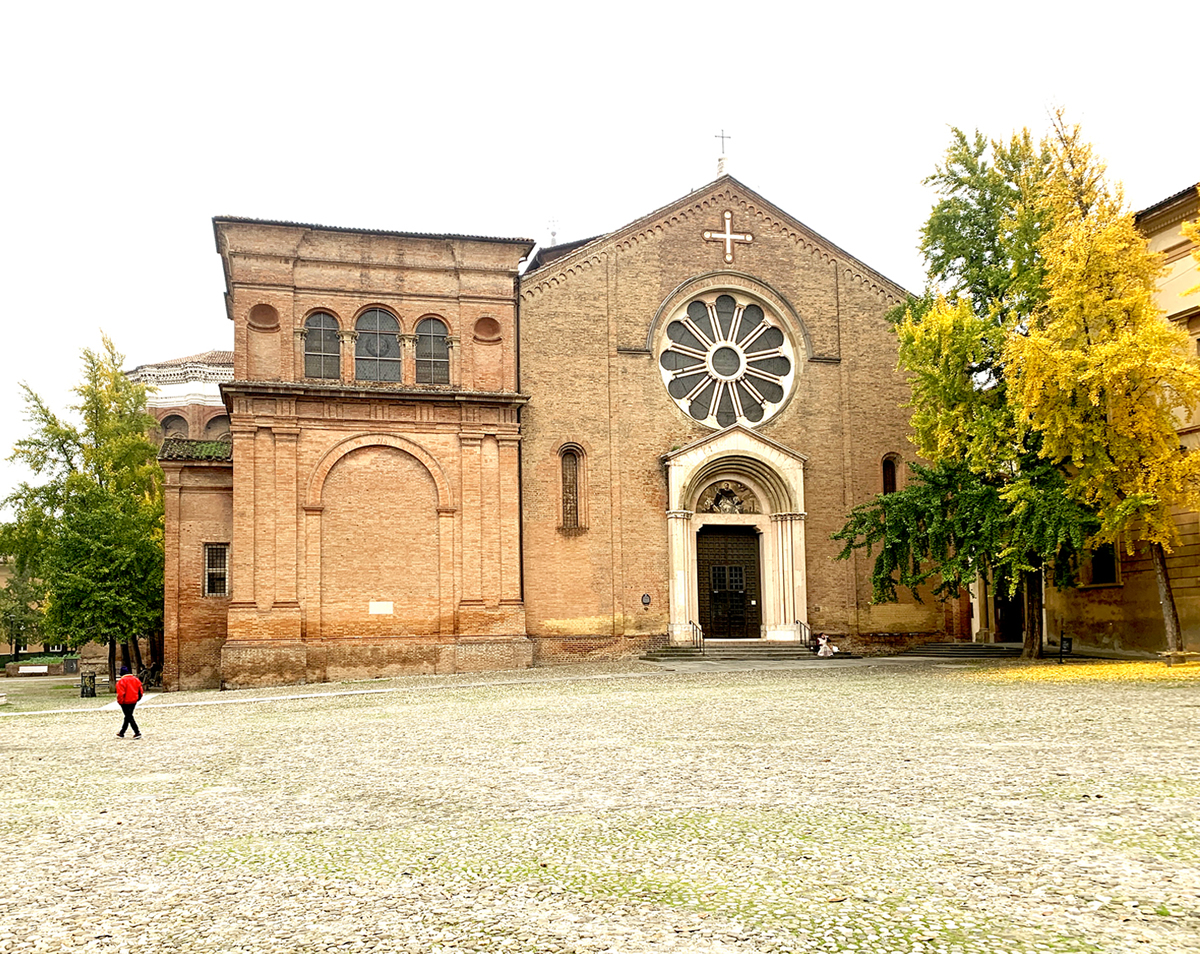 The Cathedral of San Domenico

History, art and immortality embrace the Cathedral of San Domenico. Only a few steps from the Cavour Gallery and dating back to 1200 this church was built by the Dominican friars to preserve the remains of San Domenico di Guzman. The Cathedral houses works of art by authors such as Guercino and Ludovico Carracci, but the friars entrusted the young Michelangelo to finish the precious sculptural complex of the Ark of San Domenico and it is here that his famous Angel holder can be admired.

The Music Museum is located in the prestigious Palazzo Sanguinetti. The frescoed halls of the building, which also hosted Gioacchino Rossini and now houses precious art collections, manuscripts, opera librettos from the 16th to the 18th century and the famous portrait of W. Amadeus Mozart. What a thrill for the young Amadeus to leave Vienna and travel to the towered city in a carriage with his inseparable father! The illustrious composer, at the time fourteen, actually went to Bologna to be admitted to the Philharmonic Academy, he undertook the exam under the strict guidance of one of the best teachers in Europe: Father Giambattista Martini. 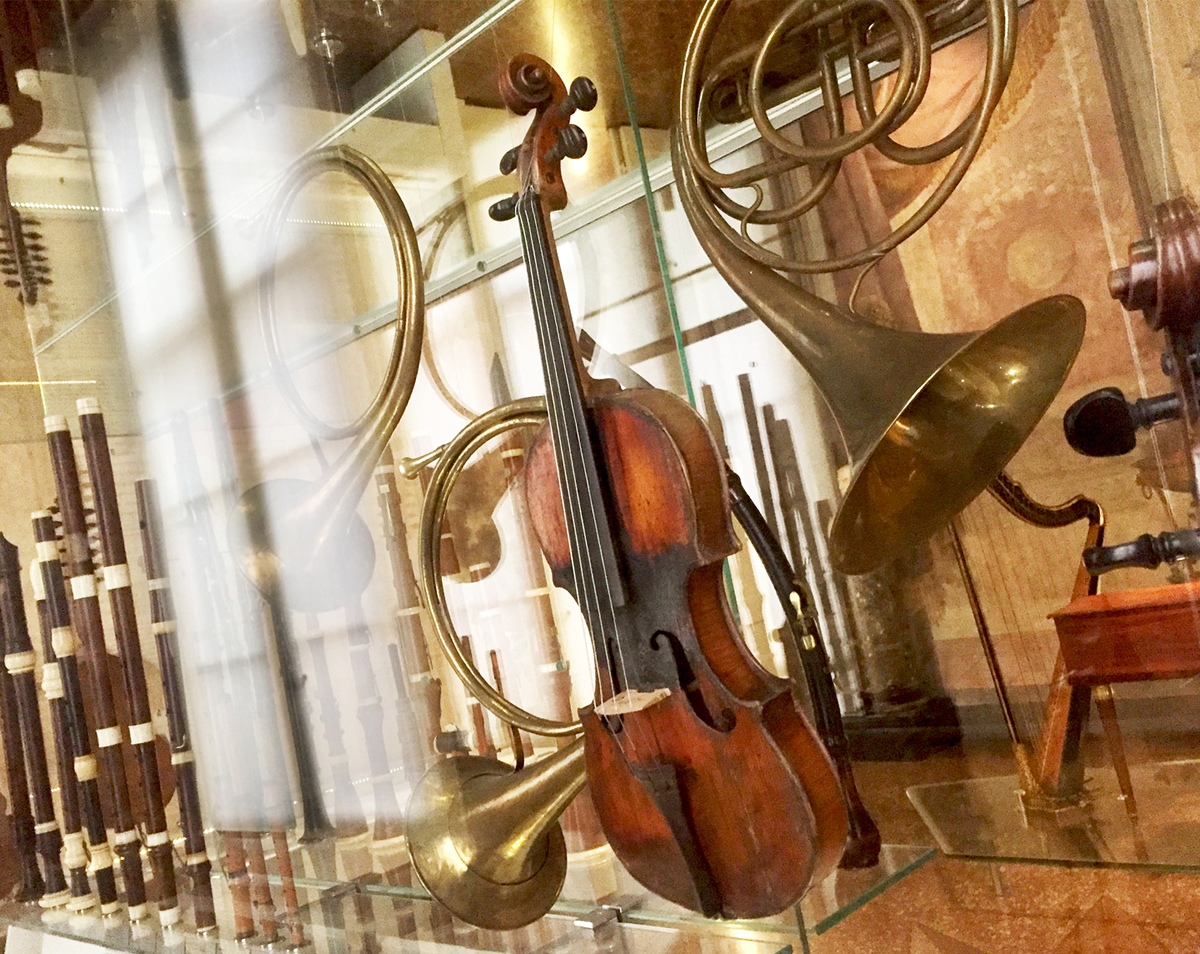 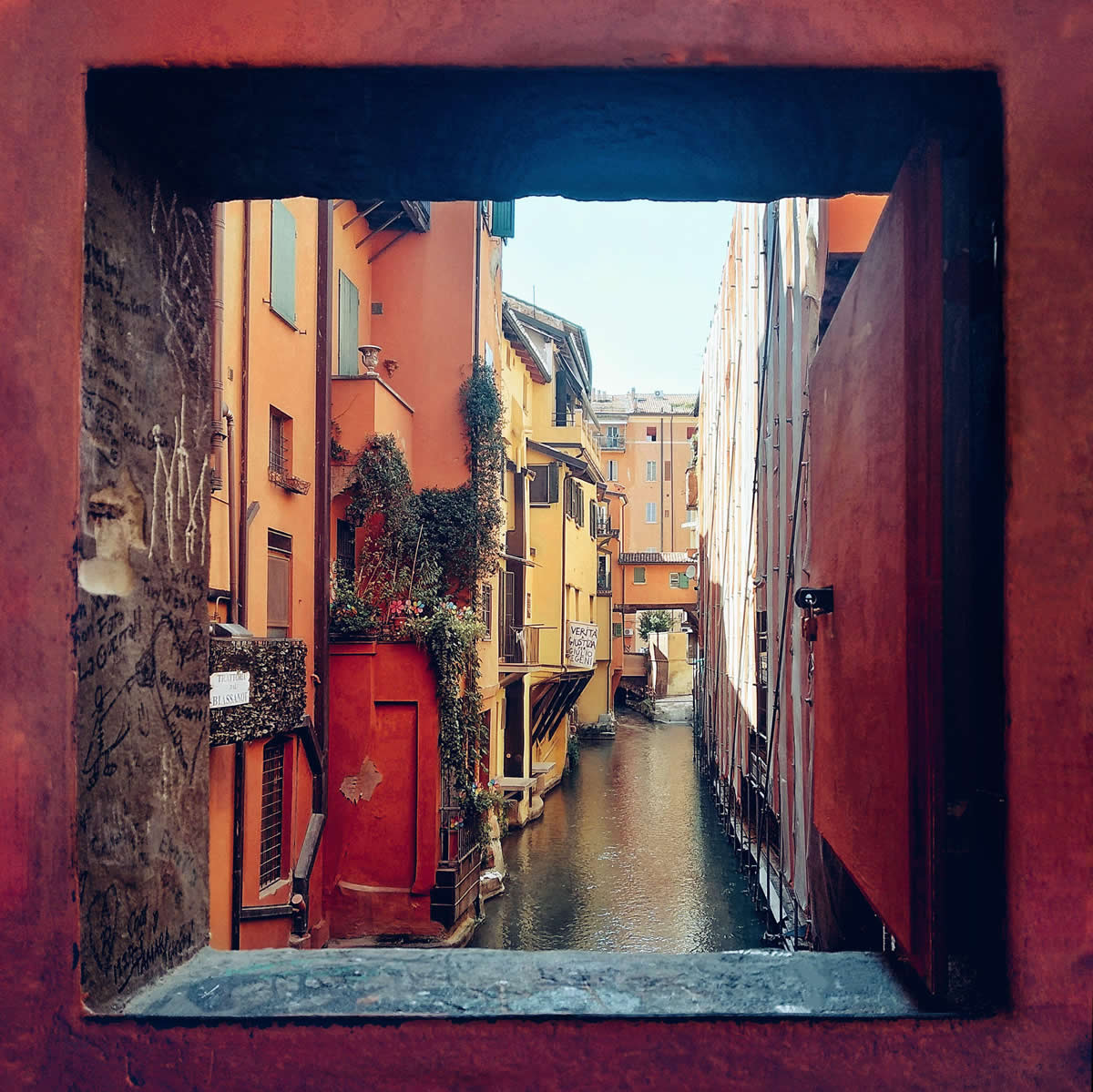 The window of Via Piella

Can Bologna be considered a small Venice? To answer this question, one can simply look out of the small but famous window in Via Piella which, in the heart of the city, secretly opens onto the Moline open-air canal. Another hidden glimpse that, between bridges and colourful buildings frames a suggestive postcard view: the perfect image of how the fluvial Bologna of the past could have appeared. In fact, during the Middle Ages and the Renaissance, Bologna was a city of water, crossed by a labyrinth of canals.

Santo Stefano is the most unique complex in Bologna, a true city sanctuary. It is known above all as the “Seven churches” because it is composed of the union of several buildings built in different eras. Facing the piazza we have the church of the Crucifix (of Lombard origins), the church of the Calvary and of Saints Vitale and Agricola and the Trinity church. Inside you can also admire the Courtyard of Pilate, with a Longobard marble basin of the eighth century and the Benedictine cloister with a double loggia (X-XIII century), one of the most superb creations of the Emilian Romanesque. 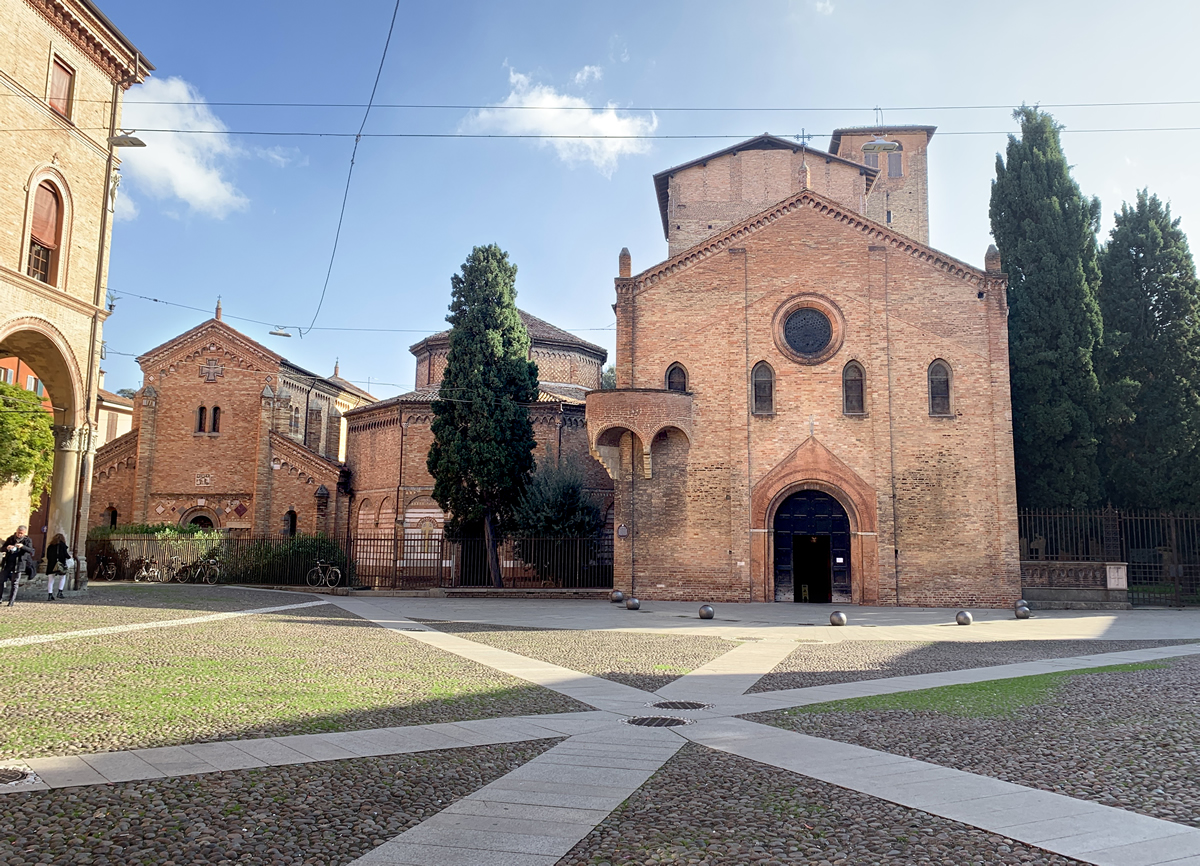