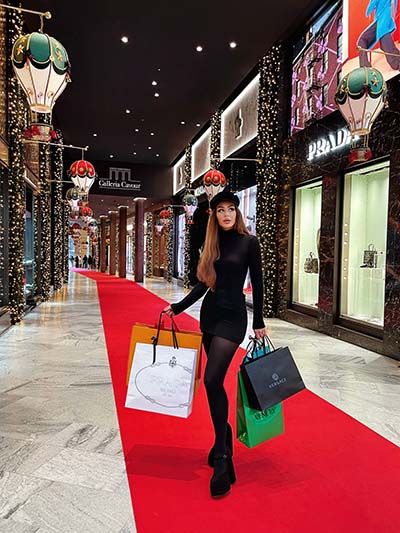 The Christmas decorations of Galleria Cavour, which this year are embellished by fairy-tale hot air balloons made entirely by hand, are giving a dreamy aura to our beloved stores and continue to attract the attention of all citizens and visitors who come to Bologna for the upcoming holidays or Christmas shopping.

There are, in fact, an increasing number of videos and photos on social media that bear the tag of our official profile @galleriacavourbologna to show, with growing enthusiasm, frames or digital postcards from our Christmas setting.

Whether it’s a video, a post or a story, hot air balloons have become one of the symbols of these holidays, seducing even personalities from the world of entertainment, such as singer Elettra Lamborghini and, just as has happened in the past for other acclaimed installations, they have become the perfect backdrop for the social shots of followed influencers.

This Christmas it was the young fashion photographer Nima Benati, born in Bologna and now transplanted in Milan, who wanted to witness the affection that binds her to our spaces and our city. The walks between the windows of our boutiques have always been a tradition for her, passionate since childhood about fashion and beauty.

The new fittings were therefore an opportunity to return to immerse herself in the Christmas atmosphere that is so dear to her. Everything was punctually witnessed on her social profile, which boasts over 740,000 followers, and the shot is now on her official wall next to the testimonies of the latest covers she has done for Vanity Fair or the shots of the important advertising campaigns of which she is now the creator. This is yet another proof that Galleria Cavour is able to cross territorial boundaries thanks to the important work of promotion and enhancement implemented by the new property and confirms itself as an iconic place in the city, a symbol of hospitality, prestige and reference point for anyone wishing to visit Bologna in every season of the year.

GO TO THE NEWS LIST
← A cocktail for those close to us Farini 14 finally on sale to the public →
Manage Cookie Consent
This site uses cookies, including from third parties, to ensure you get the best browsing experience.
Functional cookies will be installed without your consent.
Marketing cookies will be installed only with your consent, by flagging the relevant categories that can be viewed by clicking "View preferences".
By clicking on "Accept cookie" all cookies will be accepted.
By clicking on "Reject " only functional cookies will be accepted.
Clicking on the X at the top right of this banner implies the persistence of the default settings and therefore the continuation of navigation in the absence of cookies other than functional ones.