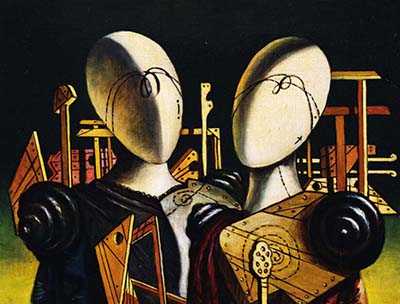 After the Christmas holidays, Bologna continues to offer its citizens and numerous tourists a unique cultural offer of the highest level. This is demonstrated by two exhibitions, both housed in Palazzo Pallavicini, a historic residence in the heart of the city, easily reachable on foot from Galleria Cavour. Until March 12, the residence, which boasts rooms dating back to 1.400, will be the site of the exhibition dedicated to the painter Giorgio De Chirico and the retrospective focused on Roberto Ferri.

The one on the father of metaphysics is a corpus of works curated by Elena Pontiggia and Francesca Bogliolo which investigates the artist’s work starting from 1938, a period in which, having left Paris, the painter returned to Italy strengthened by the inspirations of Rubens and Delacroix. It is a particularly flourishing moment for his production which, instead of preferring the representation of reality, focuses on the search for an irrational world. The Baroque works, at the center of the exhibition, are in fact the testimony of De Chirico’s ability to investigate beyond the truth and to delve into the path that made him the forerunner and greatest exponent of a revolutionary genre that finds confirmation in masterpieces such as “Autoritratto nudo” and “La pattinatrice”.

Also present in the exhibition proposal are the works relating to the emblematic mannequins which have become among the best known of the famous artist, such as “Ettore e Andromaca“. The suggestions of the itinerary dedicated to Roberto Ferri also recall the Baroque, also curated by Francesca Bogliolo, which houses sixty works including oils on canvas and drawings in which the artist, considered by many to be Caravaggio’s heir for the skilful use of lights and shadows, delves into an anthological reflection between the sacred and the profane, with dreamlike representations ranging from sinful allegories of human impulses to mystical transpositions of the sacred.

This double exhibition therefore becomes a precious opportunity to admire the magnificence of two internationally renowned Italian artists and to be enchanted by the power of art and its ability to transport us to distant and visionary worlds.

GO TO THE NEWS LIST
← It is the last week dedicated to the Christmas holidays K-Way shows at the fashion week →
Manage Cookie Consent
This site uses cookies, including from third parties, to ensure you get the best browsing experience.
Functional cookies will be installed without your consent.
Marketing cookies will be installed only with your consent, by flagging the relevant categories that can be viewed by clicking "View preferences".
By clicking on "Accept cookie" all cookies will be accepted.
By clicking on "Reject " only functional cookies will be accepted.
Clicking on the X at the top right of this banner implies the persistence of the default settings and therefore the continuation of navigation in the absence of cookies other than functional ones.